The drop-down boot menu can be accessed by clicking Change boot template in the server’s card in the Operating system tab.

The menu includes the following options:

Choose your boot option and restart your server. It is standard to boot from the first or subsequent HDDs. By booting to the Boot Menu or Rescue, you can use different installers or tools for troubleshooting and restoring your system.

The Selectel Boot Menu provides access to installers for the most popular operating systems, as well as software for troubleshooting and restoring your system. The boot menu is accessible from the KVM console: 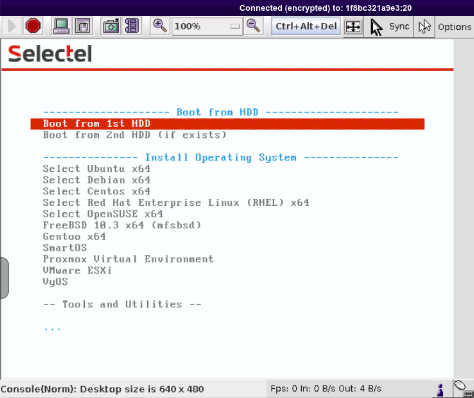 This kind of installation is the same as a disk installation. Several operating systems (marked SemiAUTO in the menu) offer semi-automated installations. The installer will request key parameters for these options (such as network settings, RAID/LVM settings, etc.).

The Tools and Utilities section is home to an array of utilities for troubleshooting and restoring your system.

When choosing Boot to Rescue, a system is loaded from RAM that does not use the server’s local disks. Boot to Rescue is recommended when general server access is lost or troubleshooting is not possible using the OS’s own tools. The rescue system contains a suite of tools for troubleshooting and restoring a malfunctioning system.

Once you select Boot to Rescue, a username and password for the SSH connection to the server will appear in the control panel.

When the server restarts, it will be accessible via network connection and can be managed over SSH – which is much more convenient than the KVM console.

The rescue system will immediately try to find and connect RAID/LVM partitions. This allows you to check and restore file systems, as well as restore data from backups. This can be done using Supload, a utility designed for working with Selectel Cloud Storage.

The rescue system includes infiltrate-root, which makes it easier to change the root catalog (chroot) to gain direct access to the server’s data, reset the root password, edit configuration files, and more.

Windows PE is a minimal Windows OS with limited services that launches from the server’s memory. It is primarily used for troubleshooting, restoring, and deploying Windows. The operating system lets you:

You can download and launch Windows PE from the server control panel:

To connect remotely via VNC, use the standard port 5900 and the password from the control panel.